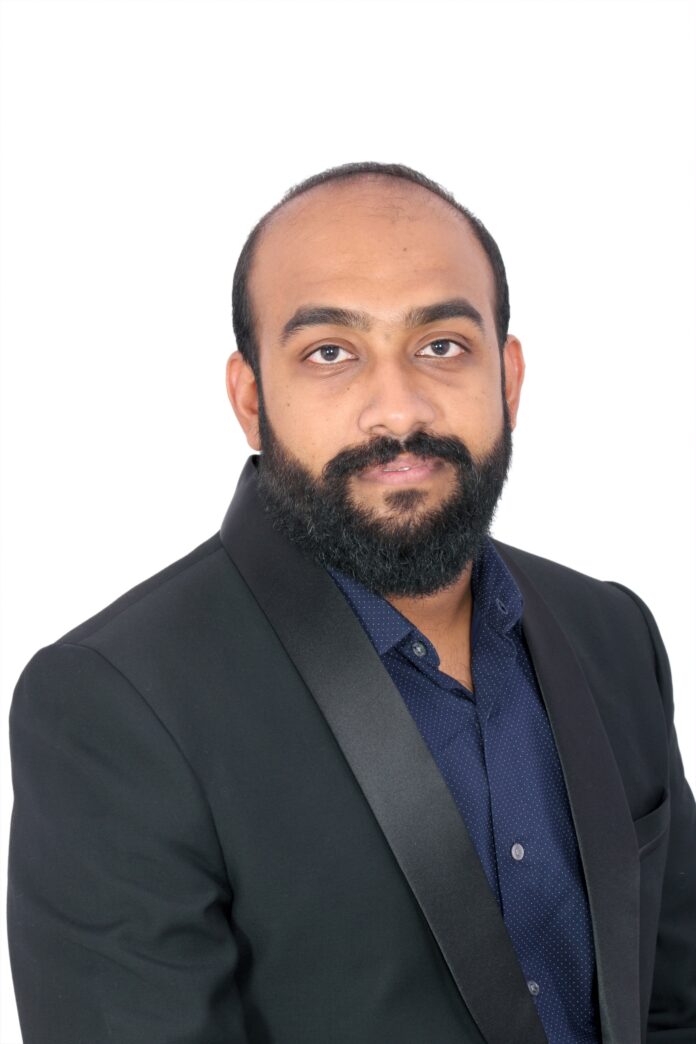 As India works to fulfil its pledge to reduce its carbon emissions to net-zero by the year 2070, reducing reliance on fossil fuels has been an important goal. To this end,  India is aggressively promoting the adoption of Electric Vehicles (EVs) with the aim of switching 30 per cent of private cars, 70 per cent of commercial vehicles, and 80 per cent of two and three-wheelers to electric by the year 2030. The Government has introduced incentives both for manufacturers as well as the end-users to encourage adoption of EVs. While adoption is picking up, recent incidents of EV batteries catching fire have led to considerable fear and reluctance to invest in EVs.

In order to eliminate battery fires, it is important to understand the concept of thermal runaway, which is the leading cause of battery fires.

What is Thermal Runaway? 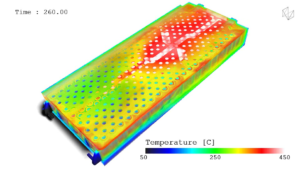 Thermal runaway in a battery is the result of a chain reaction of one exothermal process which triggers other processes resulting in an unstoppable reaction. When the temperature inside the battery reaches a point, an electrochemical reaction occurs that leads to an uncontrollable increase in temperature. In simple terms, if the temperature reaches the critical point, the battery begins to release energy which accelerates further the increase of temperature. 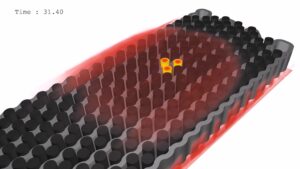 Thermal Runaway usually happens during charging batteries, particularly in high-rate applications such as Hybrid Electric Vehicles (HEV).  Understanding the cause and elimination of such failure mode is of great interest as it is one of the most common failure modes. The ascent of plug-in hybrid electric vehicles (PHEVs) and electric vehicles (EVs) as viable modes of transportation has coincided with the advancement of lithium-ion battery technology and electronics, that have enabled the storage and use of large amounts of energy previously only possible with internal combustion engines.

However, addressing the safety aspects of using these large energy storage battery packs is a significant challenge. Even though every effort is made to avoid thermal runaway situations, unexpected events such as the recent incidents of electric vehicle explosions can occur.

Design and Testing with CFD to address thermal runaway

As a result of these factors, the industry’s focus has shifted to the thermal management of large battery modules. The use of Computational Fluid Dynamics in testing such battery modules has always been more effective rather than the ‘build and test process. Various CFD tools such as Cradle CFD can be best used to simulate various thermal upset conditions and assess the performance of the thermal management in avoiding thermal runaway. Battery thermal management is used to regulate the temperature of the battery pack to avoid all these dangerous events.

The battery pack’s design and application integration are crucial in preventing cell failure propagation. For example, an adequate design of the battery pack and the electric-powered vehicle for protection against battery deformation in the event of a crash is extremely crucial, as a mechanically damaged battery can end up causing both external and internal short circuits of the battery cells. CFD software can perform simulations of general heat generation and cooling of Li-ion batteries during normal cycling (battery charge/discharge) within the battery specifications. Furthermore, external heating in an oven, external heating by a cell heating element, short-circuiting, overcharging, and mechanical deformation/crash/nail penetration can be used to effectively simulate Li-ion cells and battery packs with multiple cells. The advanced CFD tools possess features that enable 1D post-processing and network representation which gives a pragmatic view of such battery phenomena. Such results are easily quantifiable. 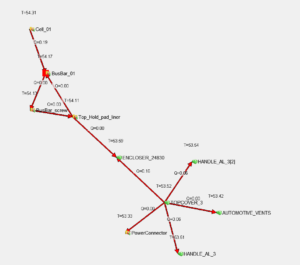 An RC Equivalent Circuit Model feature enables the representation of the behavior of the sub-cell domain in terms of non-instantaneous response. A battery is modeled with an equivalent circuit consisting of capacitors and resistors, to fit the decay curve for voltage with exponential functions, when there is a non-instantaneous voltage response against electric current. In this model, each resistance and capacitance is defined as a function of the State of Charge. This enables the representation of voltage with SOC. 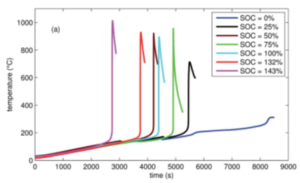 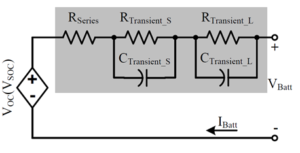 As such, numerical simulations have also shown that cooling systems such as heat pipe cooling systems though cannot remove thermal runaway in a single battery but can prevent the propagation of thermal runaway to the other batteries. The thermal environment that balances cell internal heat release and decomposition kinetics is predicted by the simulation tool. It allows for the exploration of some parameter space and identifies heat-dissipation strategy sensitivities, insulation, ventilation, and so on.

CFD simulations have also been performed on developing a coupled electro-thermal runaway model which was implemented using finite element methods based on the electrochemical and thermal models. Furthermore, by varying the spacing of adjacent cells, the solder joint area, and the cross-sectional area of the electrode tab, the characteristics of different modes of heat transfer of each cell during thermal runaway propagation of the battery module in an open environment can be studied. With the increase of cell spacing, the heat transfer capacity of the three heat transfer modes decreases for all cells.

CFD has demonstrated the successful simulation of thermal runaway which can be avoided by using heat sinks that limit the temperature rise in turn protecting the transistor. Based on the results of the heat transfer path, heat radiation effect, and the bottleneck, CFD simulations can effectively proceed with the thermal design. Also, the simulations of Heat Sinks and Fins have been demonstrated by the software which gives a visual understanding of ways to avoid such phenomena Proper Storage Temperature, Proper Ventilation, and prevention of overcharging can help avoid thermal runaway at its early stage.

Thermal runaway in batteries is a major financial risk as well as a barrier to consumer acceptance, which has become a major issue in the emerging Electric Vehicles Industry. Cradle CFD offers the best simulation platform to avoid such issues as well as reduce the computation cost and time for testing.