Hyderabad-based Atumobile has launched Atum Vader, the brand’s first high-speed electric motorcycle styled as a Cafe Racer has now been launched. Atumobile EV company works from a Net Zero manufacturing facility in Patancheru, Telangana. Production capacity was recently increased from 25,000 units per annum to a maximum of 3,00,000 units.
With the Electric Two Wheeler (e2W) industry targeting serious goals by the end of the decade, there is now a much more robust interest in the space. And while the e2W is dominated by the availability of electric scooters, electric motorcycles are slowly beginning to increase in number. 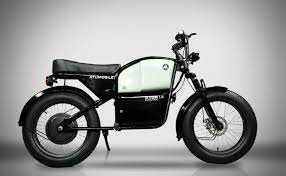 Atum Vader Electric Motorcycle Launch On the price front, Atum Vader tops out at just under a lakh. The company has introduced an early bird offer for its first 1000 customers. For them, Atumobile Atum Vader will cost Rs 99,999. Reservations are being entertained for a pre-booking price of Rs 999. Atum Vader specs are listed at 65 km/h speed, 100 km/charge range, and a 2.4 kWh battery pack. The bike is built on a tougher tubular chassis, and is fitted with LED indicators and tail lamps. Boot space is at 14 litres. The e2W industry is fast becoming an expensive space in the high-speed segment. And the market is already dominated by scooters that are currently retailing at a price much higher than the Atum Vader motorcycle Atum Vader recently announced its Automotive Research Association of India (ARAI) approval. With only a handful of electric motorcycles in the market, Atum Vader is only one of two ARAI-approved electric bikes in the country. Atumobile Atum 1.0 was launched in October 2020. The company has thus far sold 1,000+ units of its electric low-speed cafe racer. Atum Vader – 100 km/charge range Vamsi G Krishna, Founder, Atumobile, had some inspiring words to share on the launch of Atum Vader, “This is a proud day for all of us at Atumobile. Atum Vader has been in the making for a while and it’s a great feeling when you see a dream become a reality. A reality that’s not only the need of the hour for a better, greener India but for our entire team who’ve left no stone unturned in bringing our customers the best and nothing less. Apart from its 65 km/h speed, an impressive 100 km/charge range, Atum Vader has specially curated safety switches and high-end tyres for off-road use as well. We were able to design this electric bike keeping in mind Indian roads, and riders, with the assistance of our R&D experts and in indigenous solar-powered zero-emission facilities, making it a truly green and sustainable electric bike.

We’re offering the first 1000 customers our bike at an early bird price of Rs 99,999 which they can reserve for a low pre-booking price of Rs 999 only. We are confident that Atum Vader will be an inspired solution to our nation’s pollution crisis as well as the climate crisis the world is facing.”